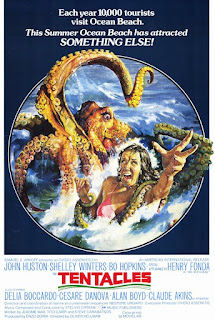 Tentacles (1977) Tentacles was one of the many immediate attempts to capitalize on the success of Jaws, but interestingly enough, there are few references to sharks in this film, and aside from a couple “action” scenes and the whole thing taking place at a seaside community, it is comparable to Jaws in few other ways. The main way they differ is in terms of filmmaking quality.

The only two names that stood out to me in the credits were John Huston, who plays a news reporter, and Henry Fonda, who’s credited as “Mr. Whitehead”. Wow, that’s a real nice name for the Academy Award-winning actor in your movie. They might as well call him Zit.  The reporter investigates the strange deaths that have occurred, which leads him to the oceanographic institute nearby.

For the rest of the movie, it cuts unevenly back and forth from the orca trainer who works there, to his wife and her associates on a boat, to the reporter and his investigating, and then to the sister, who is taking her boys to a sailboat race. I could never tell what the main story thread was exactly, and as a result, it’s not really clear who the main character is. There are many peripheral characters with growing emphasis placed on them, perhaps to create tension so the audience doesn’t know who might die and who might live. In the end, I wished they had all died.

When I put on Tentacles, I was actually hopeful, and to begin with, the movie isn’t that bad. In fact, I thought the opening scene was great. First we get the point of view of the octopus in the ocean, right beside the breakwater. Up on the sidewalk above, a mother is playing with her baby in its stroller.

Traffic passes by, and after a school bus passes, the baby is gone.

I’ll start with the short list of the remaining things I liked that I haven’t already mentioned.